Now that most insects have bedded down for the winter, I have once again turned my attention to trying to improve my fungi identification skills. I do find this group extremely challenging to identify to species level but this year I have concentrated my efforts on getting to know the Amanita family. They are a group that have features in common with each other and are often attractive and statuesque in appearance.

The notable absentee amongst the following photographs is the Death Cap (Amanita phalloides) which I have not managed to find this autumn. The type of woods that I have been searching in have probably not been ideal habitat for this species. 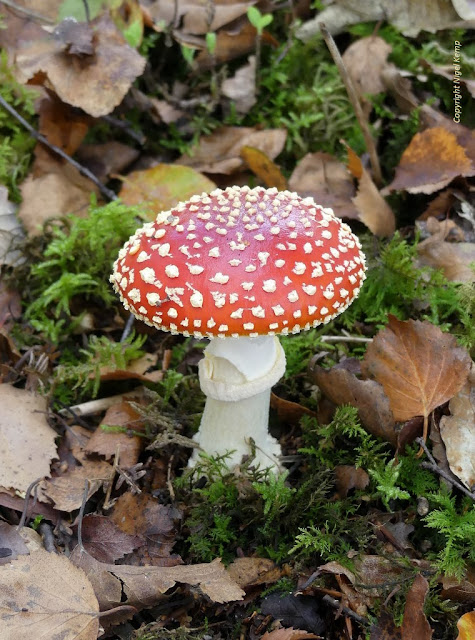 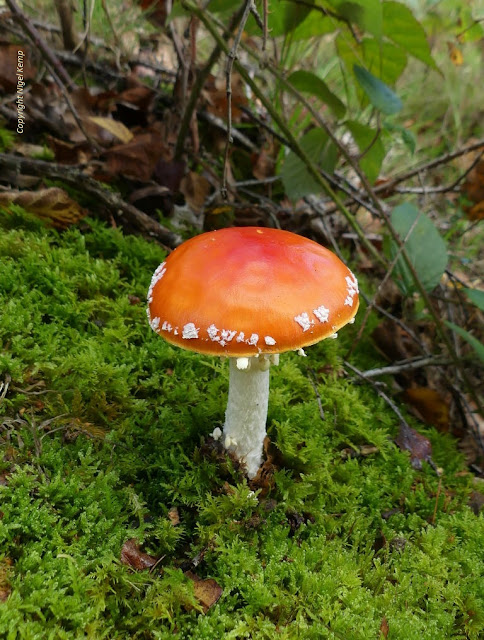 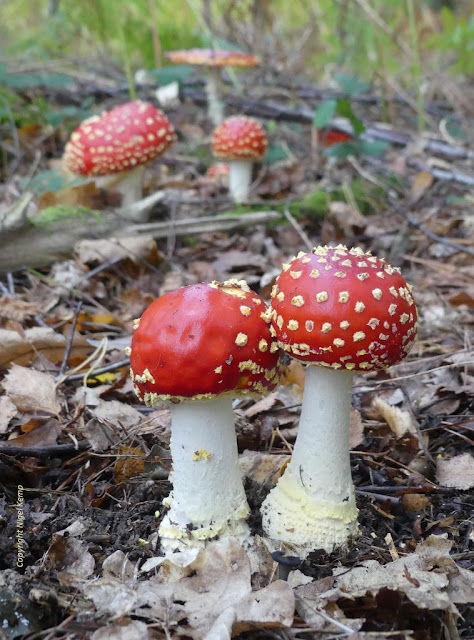 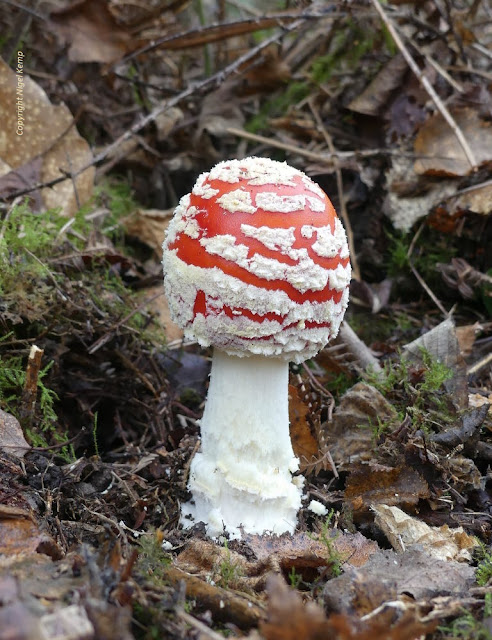 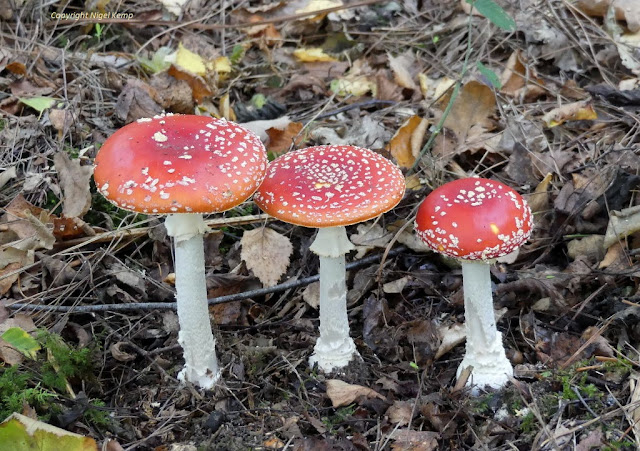 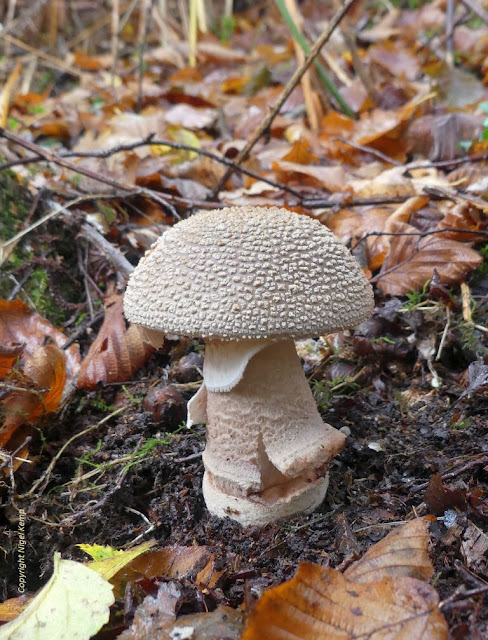 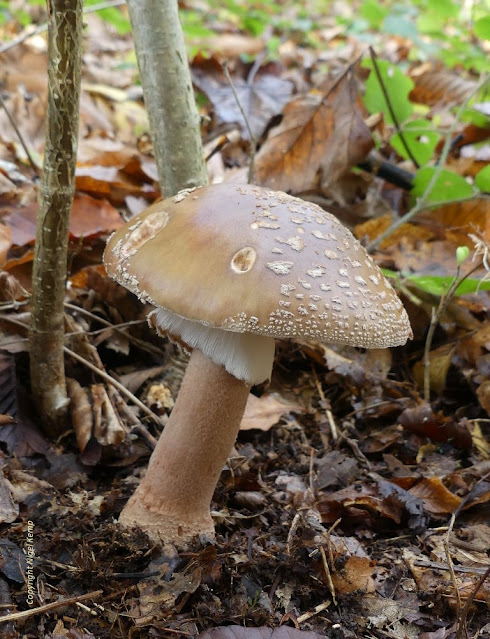 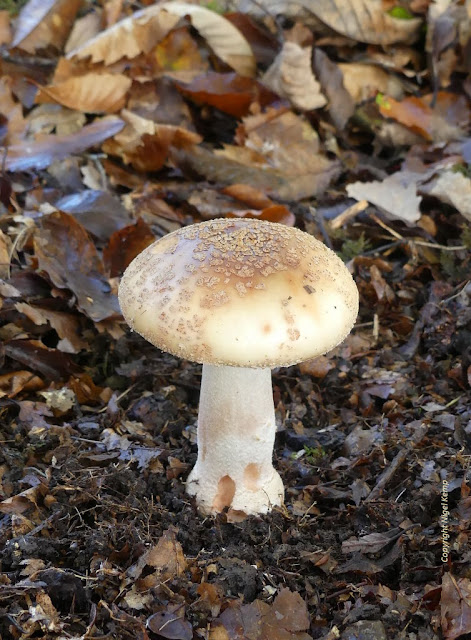 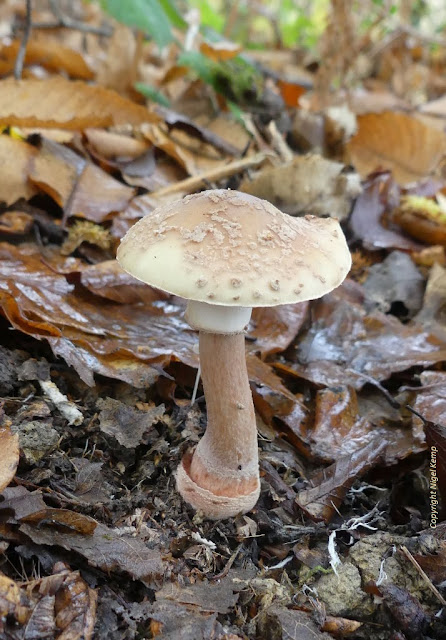 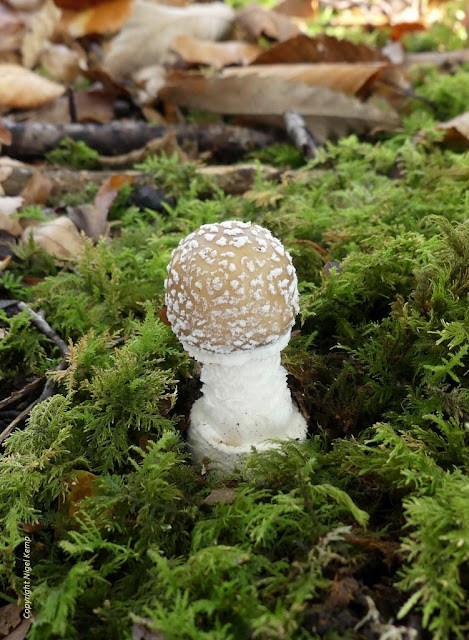 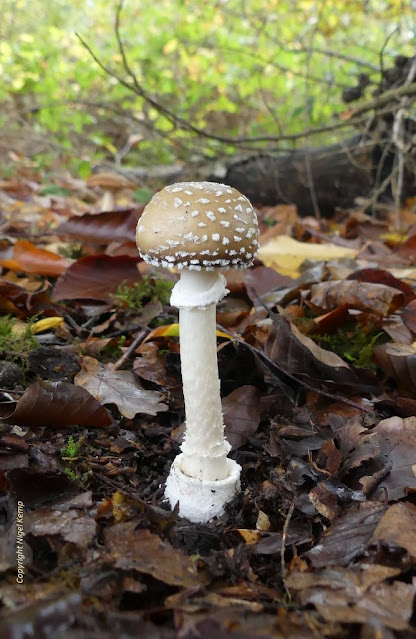 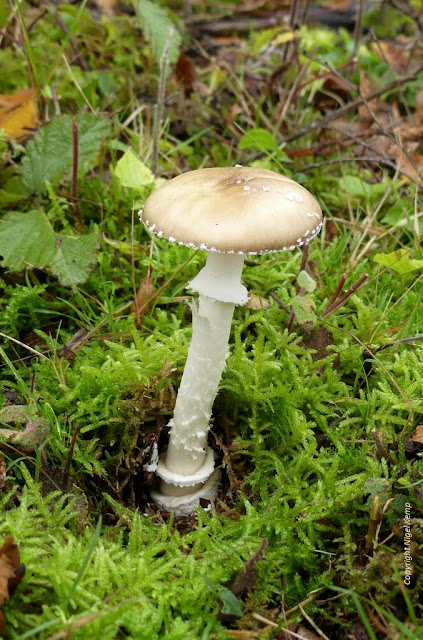 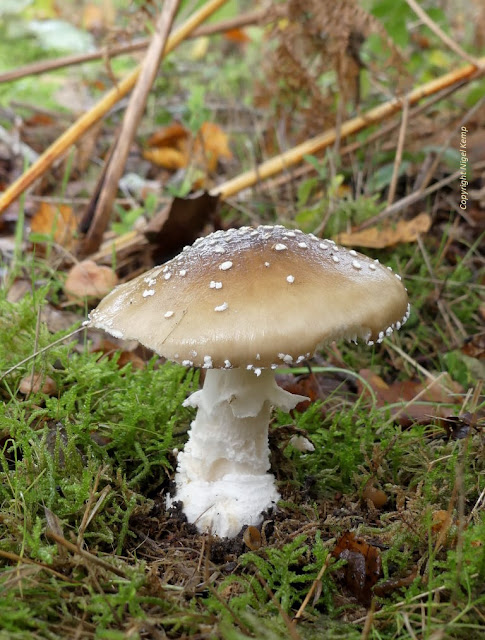 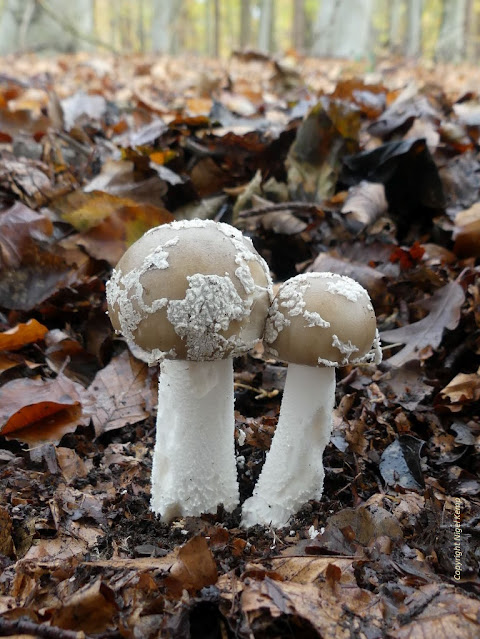 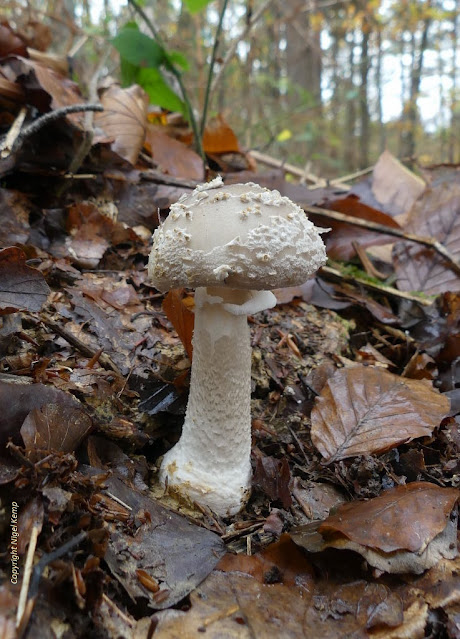 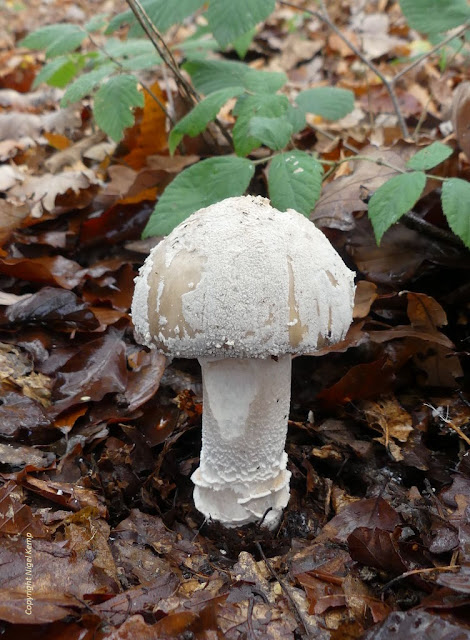 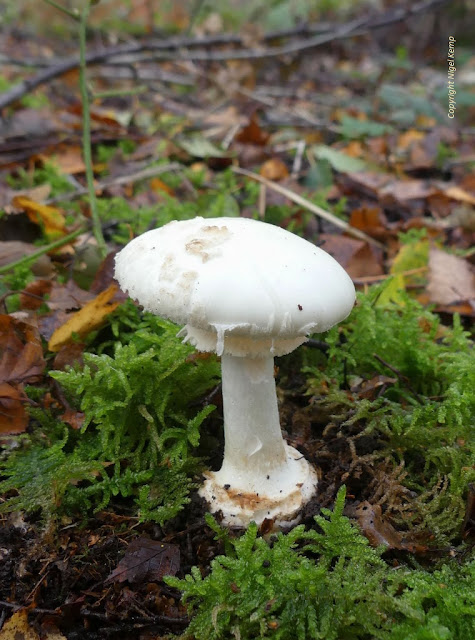 Posted by East Sussex Wanderer at 15:29 No comments:

Opportunities to put the moth-trap out in my wealden garden during October were dogged by wet and windy overnight weather. Catches were generally small but here are some images of a few species that are always nice to find waiting for me in the morning. 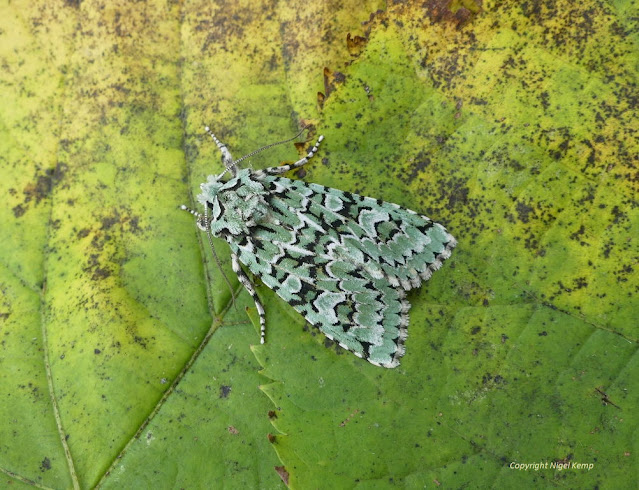 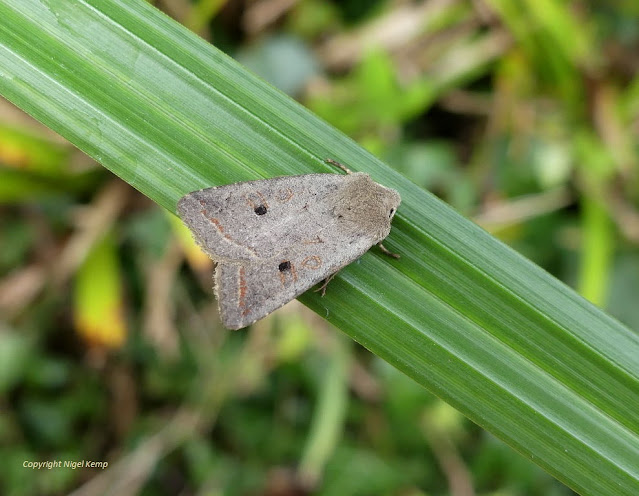 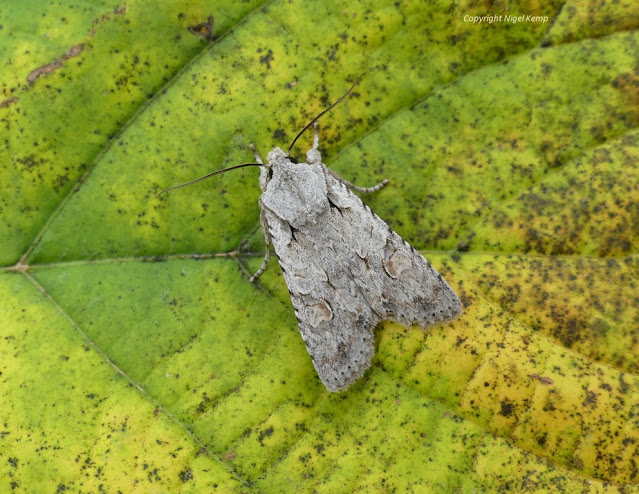 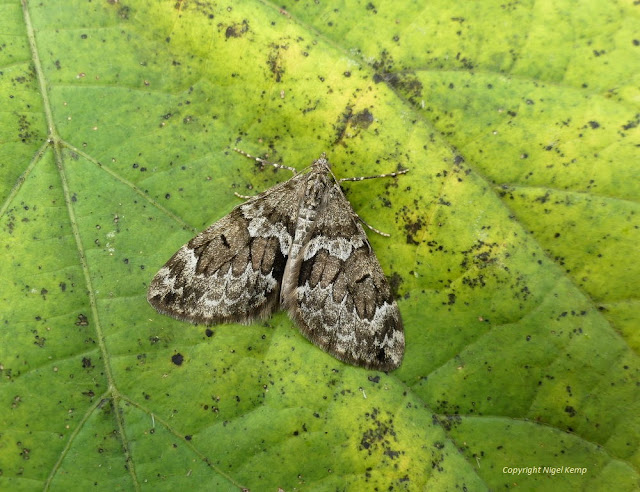 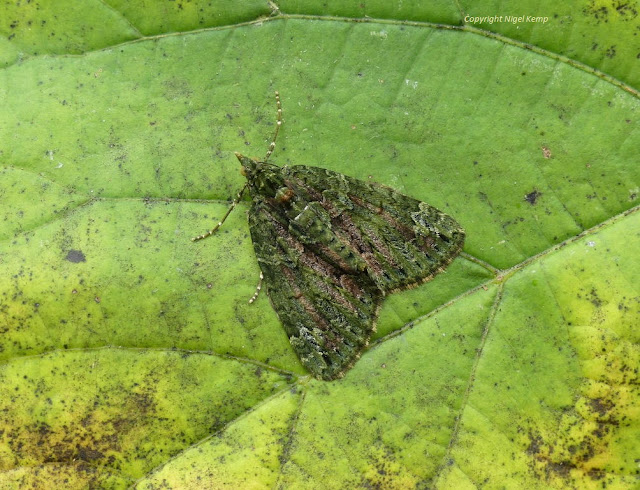 Posted by East Sussex Wanderer at 11:06 No comments:

Autumn is a time of year when nature prepares itself for the coming winter. Deciduous trees start to shed their leaves and animals that go into hibernation will be feeding up in order to survive the winter months. If the weather is mild, there is still plenty of insect activity to be found and it can be a good time of year to look for caterpillars of several species as they reach maturity before wandering off to pupate. 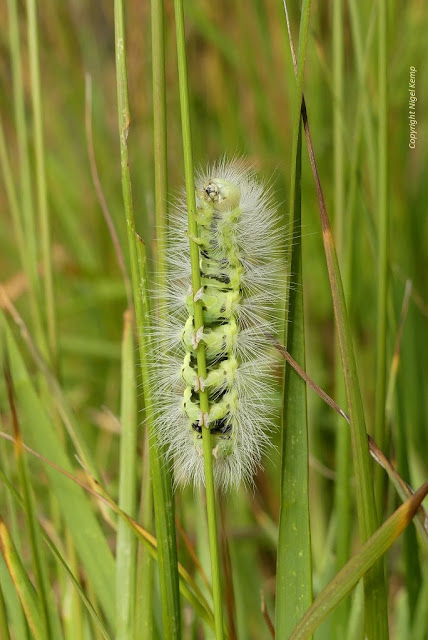 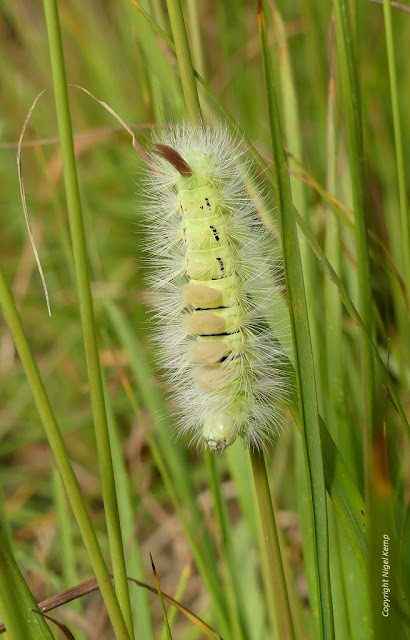 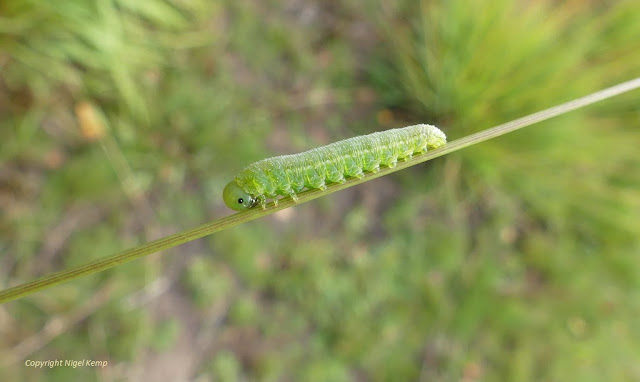 Posted by East Sussex Wanderer at 16:36 No comments:

Sexual dimorphism is common in the insect world where males and females of many species differ from each other, most usually by size or colour and markings. Nature doesn't do anything without good reason and males are often brightly marked for courtship or to hold territories and females are often duller so as to go about the business of egg-laying unnoticed.

The Vapourer Moth (Orgyia antiqua) takes this concept to an extreme level and male and female look nothing like each other. The male is commonly seen flying along woodland edges during summer and into autumn and he is equipped with an impressive pair of feathered antennae which are used to scent-track a female.

The female Vapourer is flightless, having only very rudimentary wing projections and she has evolved into a swollen egg producing receptacle. When she emerges from her pupal cocoon she will wait to be found by a passing male and once mated, she will lay her eggs on the outside of the cocoon and surrounding foliage. When exhausted, she will die without ever having ventured far from her birthplace.

Earlier this week I happened upon a mating pair as I walked in one of my local Wealden woods. 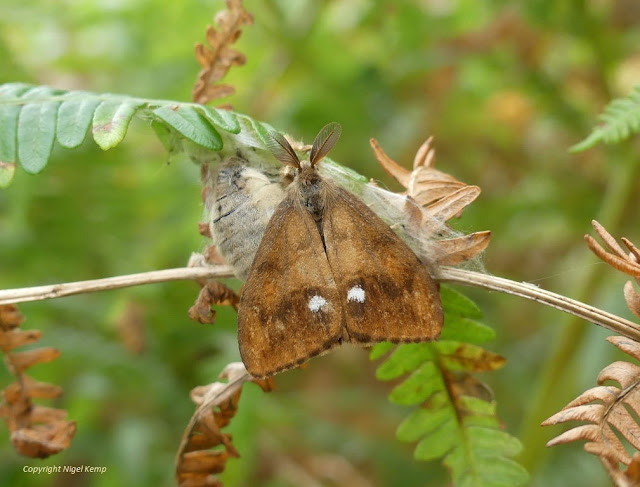 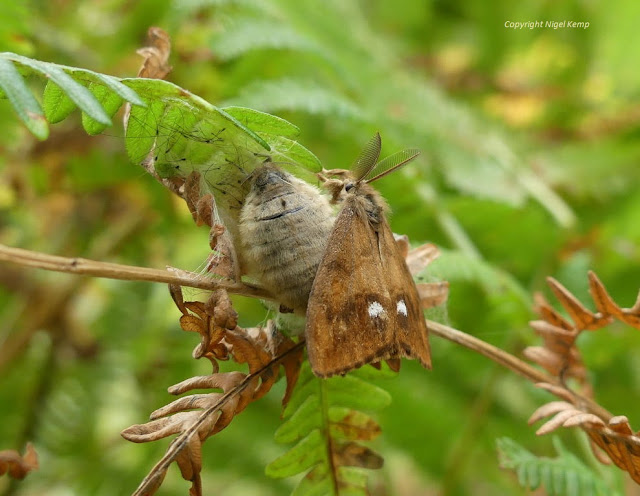 The next day I returned to observe the female laying her eggs. 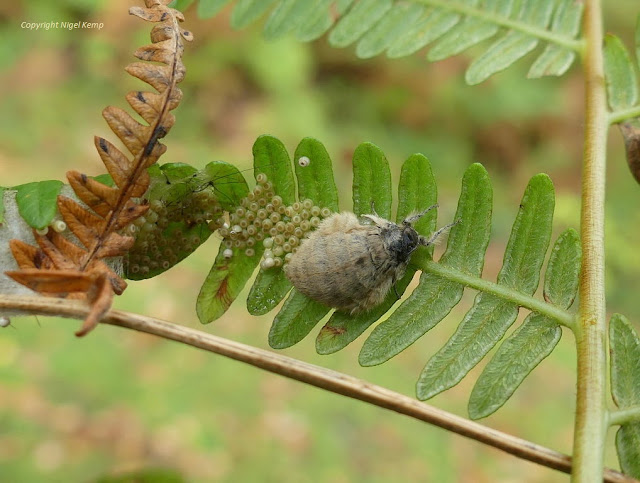 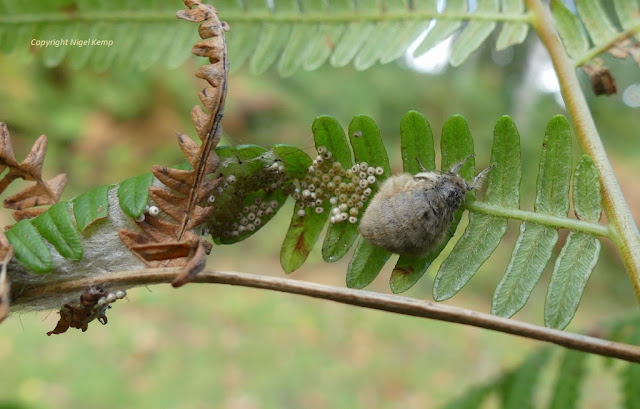 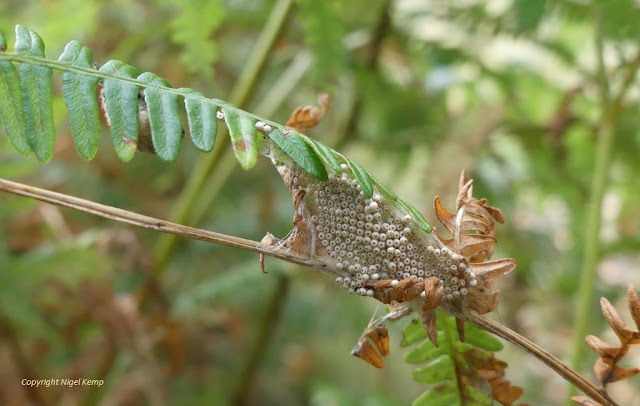 Posted by East Sussex Wanderer at 17:01 No comments:

Reacquaintance with the Willow Emerald Damselfly

2020 is the third year that I have enjoyed watching the development of a population of Willow Emerald Damselflies (Chalcolestes viridis) on Pevensey Levels, that I first found in September 2018.

I have observed males holding territories on most species of tree that occur at this site, including willow, aspen, hazel, blackthorn and field maple but this population seems to have a preference for oak.

The oaks that overhang the water ditches on this site have thin tendril-like lower branches that hang down into the water. I have now seen three tandem pairs of viridis, all of which have taken a very close interest in these oak branches in the form of oviposturing. However, I have only observed this behaviour through binoculars at distance and as yet I cannot be certain whether eggs have been laid, although it does seem likely.

A couple of weeks ago, Bob and I enjoyed watching a mating pair of viridis as we sat on a ditch bank with the sun on our backs and zooming in on the action.

Posted by East Sussex Wanderer at 10:41 No comments:

The Dark Crimson Underwing (Catocala sponsa) is a rare Red Data Book moth species in Britain, only breeding in the New Forest area of Hampshire.

However, sponsa has been turning up regularly at moth traps in Sussex and beyond in recent years and it seems probable that it is now breeding in the county, most likely from migrant stock.

Back in May 2017, I came across a mature sponsa larva in a West Sussex wood and it turned out to be the first larva to be found in the wild in Sussex since 1857. (Ref; "A Complete History of the Butterflies and Moths of Sussex" by Colin R. Pratt.)

Since 2017, I have been hoping that sponsa would make an appearance at my garden moth trap but alas it hasn't happened yet but as luck would have it, I disturbed one from a tree trunk in one of my local wealden woods during August. It took off just ahead of me but luckily it landed again on another tree.

Here are a couple of favourites from the moth trap during July and August.
Buff Arches (Habrosyne pyritoides)

I have often thought that trying to identify flies to species level would be like treading a slippery slope to oblivion but the pandemic lock-down gave me the opportunity to take a much closer look at some of them, particularly hoverflies and sawflies.

Here are some images of  a few common hoverflies and a not so common sawfly species.